Krispy Kreme? You heard me. If you live in SoCal like I do, the best donut place around (in my opinion, at least) has to be Krispy Kreme. Take a ride to your nearest location just after sunrise, pick up a dozen “Hot Now” donuts fresh off of the turn table, and you’ll see what I mean.

So I got to thinking as  I passed a Krispy Kreme store the other day, what if I tried to replicate them on my own? 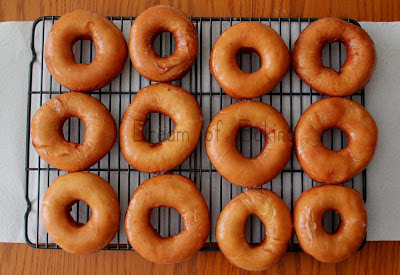 Now, the problem was…I had never made donuts in my life before. So, being on winter break and needing something to do (and to mess up a sparkling clean kitchen), I decided to hunt for a donut recipe.

I had some things in mind as I searched: the recipe should not be too complicated, and it should not end up dough-y like those donuts from the small shops tend to be.
One search term helped me: krispy kreme copycat recipe.

Yep. Well, actually, I knew no one had actually come up with the exact formula, but why not give it a try?

I ended up using this recipe, following it exactly.

What happened, you ask? They turned out fantastic, actually! (If you don’t count the floury mess I made in the kitchen and on my laptop- woops!). 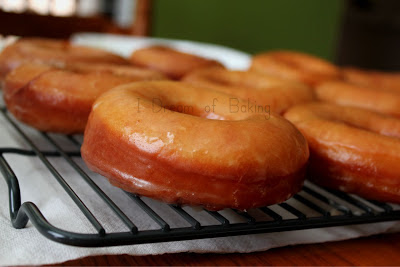 Hints if you want to successfully make these donuts:

-Let the dough rise! Twice, in fact.
First, after mixing all ingredients; and second, after cutting the shapes.
-Use warmed milk; scalded (which I took to mean warming it until it almost bubbles) and then cooled.
-Heat the oil to 350! And make sure to pay attention to this, or the donuts will not turn out fluffy.
-Let the donuts drain oil after frying, and then dip them in the glaze while they’re still warm. The result will be a shiny glaze just like Krispy Kreme’s donuts.
-Do not use your laptop or electronic device as a recipe book. It is guaranteed that you will get flour on it.

Let me know if you have any questions or just comment! Thanks for reading!

I'm Rubina. I love exploring new recipes for kids and adults alike. I make complicated ethnic dishes simple so anyone can easily make them and enjoy.

Find me on Yummly